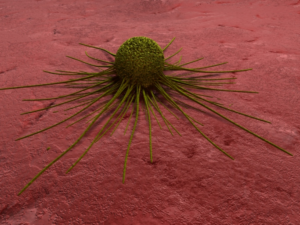 Cancer cells are the result of damage (mutations) to DNA in the cell’s nucleus that turns a healthy cell into a type of parasite.  Cancer cells grow much faster than ordinary cells competing with healthy cells for nutrients.  Having lost their normal control systems for growth, cell division and death, these cells multiply out of control.  They attract new blood vessels to themselves to feed their runaway appetites for the nutrients needed for their out-of-control growth. Cancers can grow “tentacles” to reach out and invade other areas. Cancers can even clone themselves.  When they travel through the blood stream and lymphatic system, they metastasize throughout the body.

Although genetic weaknesses and predispositions may contribute to the occurrence of cancers, environmental influences such as chemicals, radiation, and viruses are involved most of the time. Cigarette smoking is linked to 30% of cancers.

The liver detoxifies and eliminates many chemicals that might cause cancer and most traditional anticancer herbal formulas actually help by improving liver function. The liver also destroys excess estrogen, which is a signal for cellular growth and increases the development of cancers, especially in women.

It may take years for a primary tumor to grow large enough to be seen or felt as a lump. Cancer may spread through the system of lymph nodes. In very serious cases, cancer cells, traveling through the blood, may metastasize in other tissues such as the brain, lungs, or liver.

Cancer cells differ from normal cells in several ways.  They develop an anaerobic metabolism that allows them to create energy in the absence of oxygen. They have seven times more insulin receptors than ordinary cells and more receptors for glucose uptake, which means they can absorb blood sugar faster than healthy cells.  They have ten times more receptors for IGF-1, a hormone that allows glucose absorption. To sum it all up, their metabolic rate is many times faster than that of healthy cells.

In order to fuel their unusually rapid growth and reproduction, cancer cells stimulate the growth of new blood vessels around them and increase the rate at which they convert nutrients from the blood into energy for themselves.

Just like people, cells in the body have a time to live and a time to die.  Cells can die because they are killed by injurious agents, but they can also die because they are induced to commit suicide—a process called apoptosis.  There are built in mechanisms inside each cell that cause apoptosis when conditions are right.  This process takes place naturally when certain cells are no longer needed by the body or when they become a threat to the body.

The primary way the annonaceous acetogenins in paw paw work is by inhibiting the production of ATP inside the mitochondria in the cell. Since cancer cells need more energy than normal cells to survive, this loss of energy triggers apoptosis. In other words, paw paw “convinces” cancer cells to self destruct.

Are There Any Side Effects?

In early research, it was discovered that paw paw extract was consistently vomited up before quantities that could cause serious problems to healthy cells could be consumed!  In a toxicology study using dogs, they were unable to give the dogs a dose sufficient to cause death.  The dogs would simply vomit.

Also, before being released, this paw paw extract was provided to 130 cancer patients for up to one and a half years. Only three of those in the study reported nausea and vomiting and one reported itching. None had any typical chemotherapy problems such as bone marrow suppression, anemia, hair loss, etc.

The suggested use of Paw Paw Cell-Reg is 4 capsules per day until after remission. These should be taken at the rate of one capsule four times per day. Many people have found they can tolerate more and have taken 8, 12 or 16 capsules per day, again, divided into four doses. Work up slowly, and if you notice any nausea, vomiting or loss of energy, back down.

People using Paw Paw Cell Reg often find it beneficial to combine it with Immune Stimulator and Protease Plus or High Potency Protease. For maximum benefit, take all of these supplements, including the Paw Paw, between meals.

This program can be used as an alternative or supplement to chemotherapy, then continued for a month beyond the time that all tumor markers are down and there is no further evidence of the cancer. Additionally, it can be used at least once a month for the next 2-3 years.

Paw Paw is NOT a product to take to prevent cancer. It should only be taken when actually fighting cancer or some other health problem.  Also, Paw Paw only works on tumors. It is not helpful for other forms of cancer.

First, it is unlikely one would overdose on paw paw extract because vomiting occurs before too much can be consumed. If nausea or vomiting do occur, simply lower the dose.

It is typical to see significant reductions in tumor size and in tumor antigen levels within six to eight weeks. Some people report a more rapid, measurable response to the program. For instance, one lady saw an improvement in her CA-125 markers  (Cancer Antigen 125 is used to monitor ovarian cancer) after only one week.

In a patient with non-Hodgkins lymphoma, who had undergone three rounds of chemotherapy in six and a half years, the white cell count and lymphocytes returned to normal ranges after only 35 days of taking paw paw extract.

People who have cancer who take Paw Paw Cell-Reg are also reporting increased energy levels. This is because paw paw’s inhibiting effect on the metabolism of cancer cells means that healthy cells no longer have to compete with cancer cells for energy.

For more information on using Paw Paw for cancer consult The Comprehensive Guide to Nature’s Sunshine Products. Because cancer is a very serious illness, I recommend that you should have your progress monitored by appropriate medical testing and you should work with an experienced professional in developing your program.