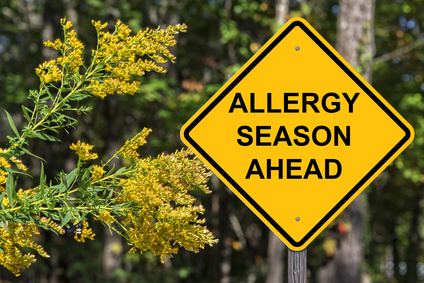 As the temperature grows warmer, the grass grows greener and flowers start poking their heads out of the ground, we know it’s spring.  And, after being cooped in up all winter long indoors, we often get the urge to be outdoors, enjoying the sunshine and letting our skin convert cholesterol to vitamin D3.Unfortunately, it’s also the time when trees and grasses bloom, releasing billions and billions of tiny pollen grains into the air, causing some 22 million Americans to experience itchy eyes, runny nose, sneezing and irritability. If you’re one of those unfortunate souls who suffer from hayfever (medically known as allergic rhinitis) then your idea of “spring fever” probably isn’t the joy of being outdoors; it’s the misery associated with upper respiratory allergies.

Hayfever is caused by sensitivity to the pollen released by flowering plants. In most people these tiny particles associated with “male” seed needed for plant reproduction cause no discomfort, but in the hayfever sufferer the immune system is excessively sensitive to these particles.

The immune reaction triggers the release of histamine, which produces an inflammatory reaction. The itchiness and redness of the eyes and sinuses is the result of this inflammation. The inflammatory process also causes thin, watery secretions on the mucus membranes and eyes, which flush the particles away. The release of histamine can cause a cascade reaction that also affects the digestive tract, resulting in digestive upset, loss of appetite, gas and bloating.

You can see why medically, hayfever is usually treated with antihistamines and anti-inflammatories. The goal of orthodox medicine is to counter the histamine or reduce the inflammation. These chemicals may help to alleviate symptoms, but they are not getting at the root causes of the problem.

Chronic suppression of the histamine and the inflammatory response in the lungs through the use of these drugs can actually make the problem worse. It reduces the ability of the mucus membranes to keep themselves clean. A little recognized fact is that suppressed hayfever can turn into other problems like asthma and probably other chronic obstructive pulmonary disorders.

Don’t worry, though. Mother Nature has nontoxic and inexpensive answers to these problems that are overlooked by most people, perhaps because her methods aren’t considered “scientifically proven.” Herbs, supplements and dietary changes may not afford the rapid symptomatic relief offered by drugs, but what they do offer are hope of a lasting cure.

Dr. Fereydoon Batmanghelidj, M.D., author of the book, The ABC of Asthma, Allergies and Lupus, explains that asthma and allergies are a sign of cellular dehydration. Normally, tears and mucus, secreted by the eyes and nose, wash particles of pollen and other irritants away. When the body is dehydrated, there isn’t enough moisture to wash these pollutants away, which triggers inflammatory reactions. Furthermore, the body uses histamine as a neurotransmitter to regulate moisture to organs when there isn’t enough water for all the body’s functions. So, when one is properly hydrated, histamine production is reduced.

Also, it is important to take a little natural salt with the water. You’ve probably noticed that tears, mucus and sweat are all salty, which means you need extra salt to help the water produce more mucus and tears. Sea Salt is an excellent salt to use for this purpose. Blood is like ocean water in the body. The trace minerals found in natural salts like this help the blood maintain its ocean-like quality. A little natural salt helps to hydrate the blood and body even better than pure water. (But, don’t use table salt for this purpose, because it has been stripped of these trace minerals and is full of unhealthy additives).

It is also essential to avoid all beverages that dehydrate the body, which include tea, coffee, caffeinated sodas and energy drinks, artificial sweeteners and alcohol. These substances all act as diuretics, which means you lose more fluids drinking them than you gain. Dr. Batmanghelidj believes that the rise in childhood asthma and allergies is linked to the increasing use of caffeinated beverages by young children.

There are also a number of supplements that can reduce allergic reactions. HistaBlock is a natural antihistamine formula that can be effective, not only for respiratory allergies, but also for food allergies and allergic reactions on the skin. HistaBlock, like all antihistamines, is a little drying to mucus membranes, it is important to stay well hydrated when taking it. Vitamin C is

also a good natural antihistamine when taken in fairly large doses (2,000 to 4,000 milligrams per day. Try mixing some Vitamin C Ascorbates in water and drinking it throughout the day (along with your plain water) to help control allergic reactions. Since bioflavonoids stabilize mast cells and reduce histamine release, you may also find taking Vitamin C Citrus Bioflavonoids helpful. The key is to take the vitamin C repeatedly throughout the day at regular intervals to reduce histamine reactions.

The xanthones in mangosteen have anti-allergic properties, and I have found Thai-Go helpful for reducing allergic reactions. I make a quart of lemonade with fresh lemons and maple syrup and then add a couple of ounces of Thai-Go (See recipe below). I drink several quarts of this and it relieves allergy symptoms when I get them. It works even better if you add some of the Vitamin C Abscorbates to the drink.

Take just one or two grains of pollen per day to start and then gradually work up to about a teaspoon (about four capsules) per day. You can also eat a spoonful of local, unfiltered honey each day. A homeopathic preparation made from local pollen may also be helpful.
Bee Pollen is not just good for allergies; it’s also a good source of energy and nutrition.

Speaking of “the hair of the dog,” it’s interesting that many of the herbs that cause allergic reactions actually help relieve them. Ragweed, from the genus Petasites, has been used to ease allergies. It’s sold as butterbur. Goldenrod is also used to combat some types of allergic reaction. Stinging nettle, an ingredient in HistaBlock, stings you because it actually contains formic acid (found in ant bites) and histamine, and it also has anti-allergenic properties. This is an interesting principle of nature that the solution to a problem is often found in the same plant that causes it. Hopefully, these suggestions will help you to suffer spring hayfever less, so you can enjoy the real spring fever and be motivated to get outdoors.

Did you know??? The biggest trigger for springtime allergies is pollen. While flowers are usually associated with pollen, it’s actually trees, grasses and weeds that release the grains. The type of plant that releases pollen depends on the time of year. Currently, tree and grass pollination is occurring.