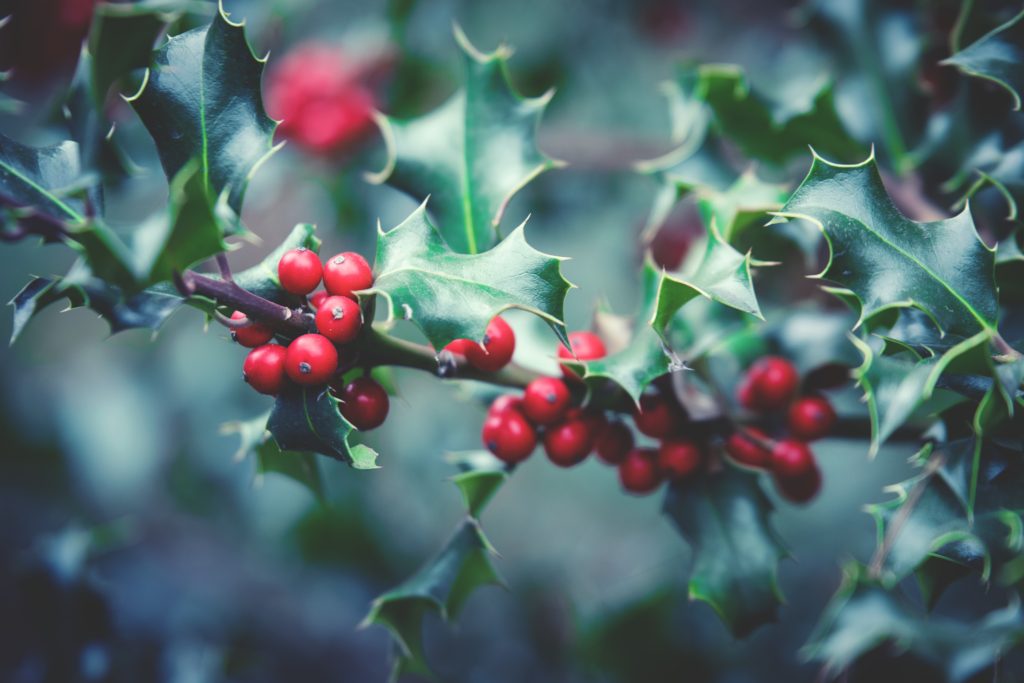 There are many herbs associated with the Christmas season. For starters, there are the herbal gifts brought by the wise men to the infant Jesus, frankincense and myrrh.  It’s interesting that these gifts of medicinal plants were placed along side gold as valuable gifts.

Then, there are the evergreens traditionally used to brighten the winter season. We have the evergreen trees (pine, spruce and fir) that are used as Christmas trees.  Then there is the mistletoe (hung where you can’t see) to encourage a holiday kiss or two.  And, don’t forget the holly and the ivy, either.

So, while you’re celebrating the holidays, take a moment to learn about the traditions and medicinal uses surrounding these famous holiday herbs.

This resin from a Middle Eastern tree has been traditionally used in perfumes, aromatherapy, medicine and religious rituals.  It was part of the temple incense in Biblical times.

Research shows that the smoke from burning frankincense contains a psychoactive compound that relieves depression and anxiety.

It can be diffused into the air, inhaled directly from the bottle or applied topically undiluted. It has antidepressant and sedative effects and can improve concentration and mental focus.

It’s also good for clearing the lungs. Put a few drops of the oil into boiling water and inhale the steam or rub into the chest for respiratory problems, such as asthma, bronchitis, colds, coughs, pneumonia or tuberculosis.

A great immune stimulant, frankincense has anticancer properties. It has been massaged into the breasts for breast lumps and can also be applied topically over any area of the body where there is cancer.  It can also be used topically for skin infections and sores.

Myrrh gum is another resin gathered from a tree native to Africa.  It has also been used in aromatherapy, medicine and in religious rituals.  Myrrh is used both as an herb and as an essential oil in herbal medicine.  The herb is antiseptic, anti-inflammatory and acts as a bitter digestive tonic.  I think it’s better than goldenseal for fighting infections.

The essential oil can be used like frankincense for respiratory problems and infections.  It is also good to apply it topically to aid the healing of canker sores, skin ulcerations and skin infections. Myrrh diluted in water makes an excellent mouthwash and a gargle for sore throats. You can read more about myrrh (and it’s close cousin guggul) in this week’s featured herb article.

Evergreen trees are used in Christmas decorations such as wreaths and as Christmas trees.  All of them have been used medicinally, but the one most commonly used is pine.

Like many of the other Christmas evergreens, pine is a wonderful expectorant and decongestant.  The bark is a great remedy for coughs and congestion.  It is an ingredient in the traditional cold and flu remedy HCP-X (Stock#1216). I also like to mix it with wild cherry bark for coughs.

The pine produces a gum or resin (like myrrh and frankincense) that is highly antiseptic and disinfectant. The pine gum can be applied directly to cuts and wounds to fight infection and speed healing.  It also helps to pull pus and slivers, which is why it is an ingredient in Black Ointment (Stock#1696).

Pine essential oil is invigorating, disinfecting to lungs and helpful for lung infections and asthma. Diffuse it into the air during the holidays for a great holiday smell and to keep your family from getting sick during the cold winter months.

Pine is another one of the original Bach Flower remedies and an ingredient in the Find Strength (Stock#8781) flower essence blend.  Pine flower essence helps to free one from undue guilt, self-criticism and shame.  It helps a person forgive themselves and accept themselves.

Pine trees have many other uses, too. There are also the highly tasty and nutritious pine nuts, which are high in omega-3 essential fatty acids.  There are also the pine nettles, which are high in vitamin C and were traditionally used as a tea in the winter to prevent scurvy.  The pollen is a source of testosterone and can be used as a tonic for men, too.

In ancient tradition, mistletoe was entrusted to the Norse god of love, which is why we have the tradition of kissing under the mistletoe.  Mistletoe is a parasitic plant and stays green during the winter.  Evergreens, like mistletoe, were cut and brought indoors to brighten homes during the long months of winter and remind people of the coming spring and summer.

Mistletoe also relieves anxiety and panic attacks, promotes sleep and has been used in the treatment of epilepsy.  It contains anticancer compounds and extracts are used in Europe for this purpose.  However, you have to be a professional herbalist to obtain it.

You’ve probably heard the Christmas song that goes, “the holly and the ivy, when they are both full grown, of all the trees that are in the wood, the holly bears the crown.”  Holly is an evergreen shrub, native to Europe. It was traditionally collected at Christmas and used to decorate homes at the time of the winter solstice. The lyrics of this Christmas carol associate the thorns with the crown of thorns worn by Jesus at the crucifixion (hence, “the holly bears the crown”).  The song also associates the bright red berries with Christ’s blood and the bitter bark with the bitter cup.  Holly was believed to protect one against spells and witchcraft.

Although not used much as a medicine today, both the leaves and the berries have been used medicinally. The leaves are astringent, expectorant and diaphoretic and were traditionally used to treat persistent cough, asthma and bronchitis.  The berries of some varieties contain caffeine and were used as a stimulant.  The mildly toxic berries are also purgative (strongly laxative) and emetic.

Holly is one of the original Bach flower remedies and is an ingredient in the new Keep Cool(Stock#8784) flower essence blend.  Holly flower essence is for people who feel they don’t get the love they need and deserve. They allow this feeling to fester in them and make them angry, envious, jealous and suspicious.  Of course, this drives people away and interferes with them experiencing real love.  Holly flower essence helps people open their heart to be more loving and compassionate with others. It also helps them to be more grateful for what they already have.

The other herb in the aforementioned song is ivy.  The Latin name for ivy is Hedera helix and it is in the ginseng family.  It is commonly used as an ornamental vine and climbs walls by means of aerial rootlets, which can cling to wood, brick or stone. When there is nothing to climb, it acts as a ground cover.

In A Modern Herbal, Maude Grieves, says that ivy was used anciently as the poet’s crown and the wreath of Bacchus. Greek priests presented ivy wreathes to newlyweds as a symbol of fidelity. Ms. Grieves says that old books recommended it to relieve the effects of drunkenness and “In former days, English taverns bore over their doors the sign of an Ivy bush, to indicate the excellence of the liquor supplied within…” She further says, “The custom of decorating houses and churches with Ivy at Christmas was forbidden by one of the early Councils of the Church, on account of its pagan associations, but the custom still remains.”

Ivy is a potentially toxic botanical, but modern herbalists have found it to have a drying quality, which makes it helpful for damp coughs and bronchitis. Plant extracts have been used in treating skin infections, itching and sunburn.  Research also suggests it may have antifungal and antibacterial properties, too.

So, as you enjoy the holidays this year, notice how plants are part of the celebration. Think of the wonderful green gifts that have been provided for our health and enjoyment and be thankful for these free gifts of nature.